ThingsBoard rule engine supports basic analysis of incoming telemetry data, for example, threshold crossing. The idea behind rule engine is to provide functionality to route data from IoT Devices to different plugins, based on device attributes or the data itself.
However, most of the real-life use cases also require the support of advanced analytics: machine learning, predictive analytics, etc.

This tutorial will demonstrate how you can:

The analytics in this tutorial is, of course, quite simple, but our goal is to highlight the integration steps.

We calculated anomaly by comparing value produced from a solar module with the average valued produced by all modules of the same panel and standard deviation of the same value.

In order to store and visualize the results of the analytics, we are going to create three virtual solar module devices for each solar panel.

The following services must be up and running:

During this step we will configure three generator nodes that will produce simulated data for testing during development. Typically, you don’t need them in production, but it is very useful for debugging. We will generate data for 3 modules and one panel. Two of those modules will produce the same value and one module will produce much lower value. Of course, you should replace this with real data produced by real devices. This is just an example.

Let’s create three devices with type “solar-module”. If you are using ThingsBoard PE, you cna put them to new “Solar Modules” group. 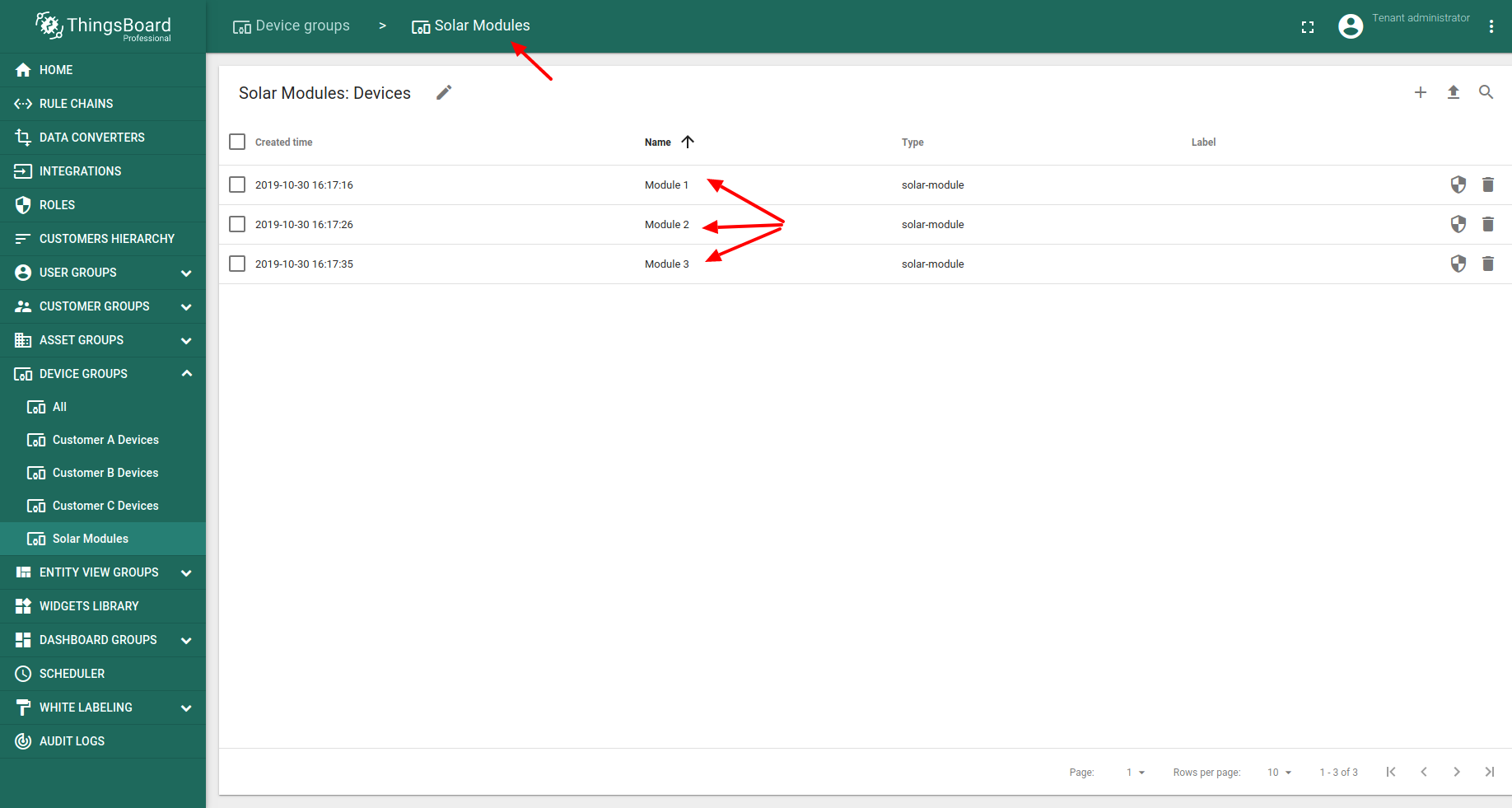 Now, let’s create three device simulators to push data directly to our local Kafka broker. The simulated data will be pushed to the Kafka Rule Node, which is responsible for pushing data to Kafka topic. Let’s configure Kafka Rule Node first. We will use local Kafka server (localhost:9092) and topic “solar-module-raw”. 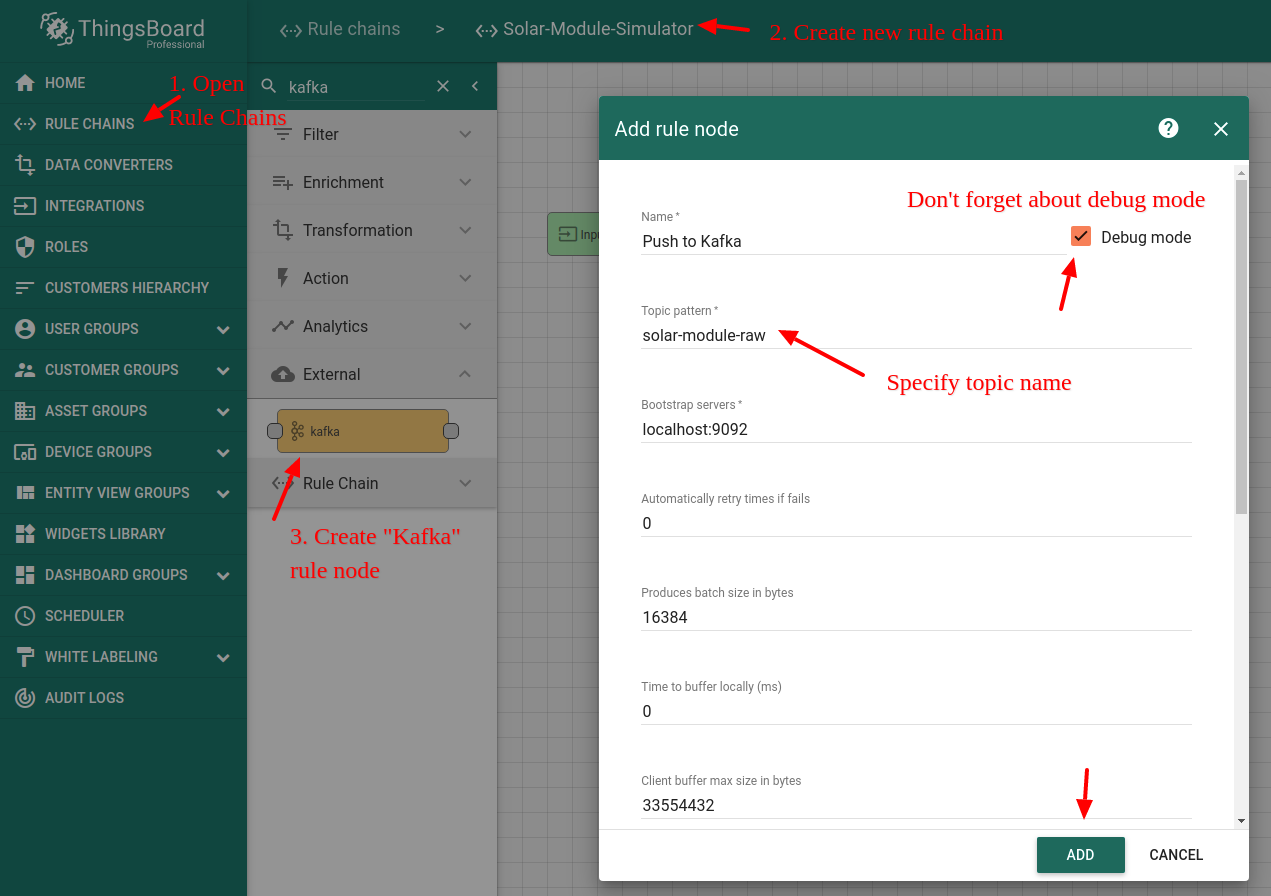 Add “generator” node for the second module. We will configure generator to constantly “produce” 5 watts as well. 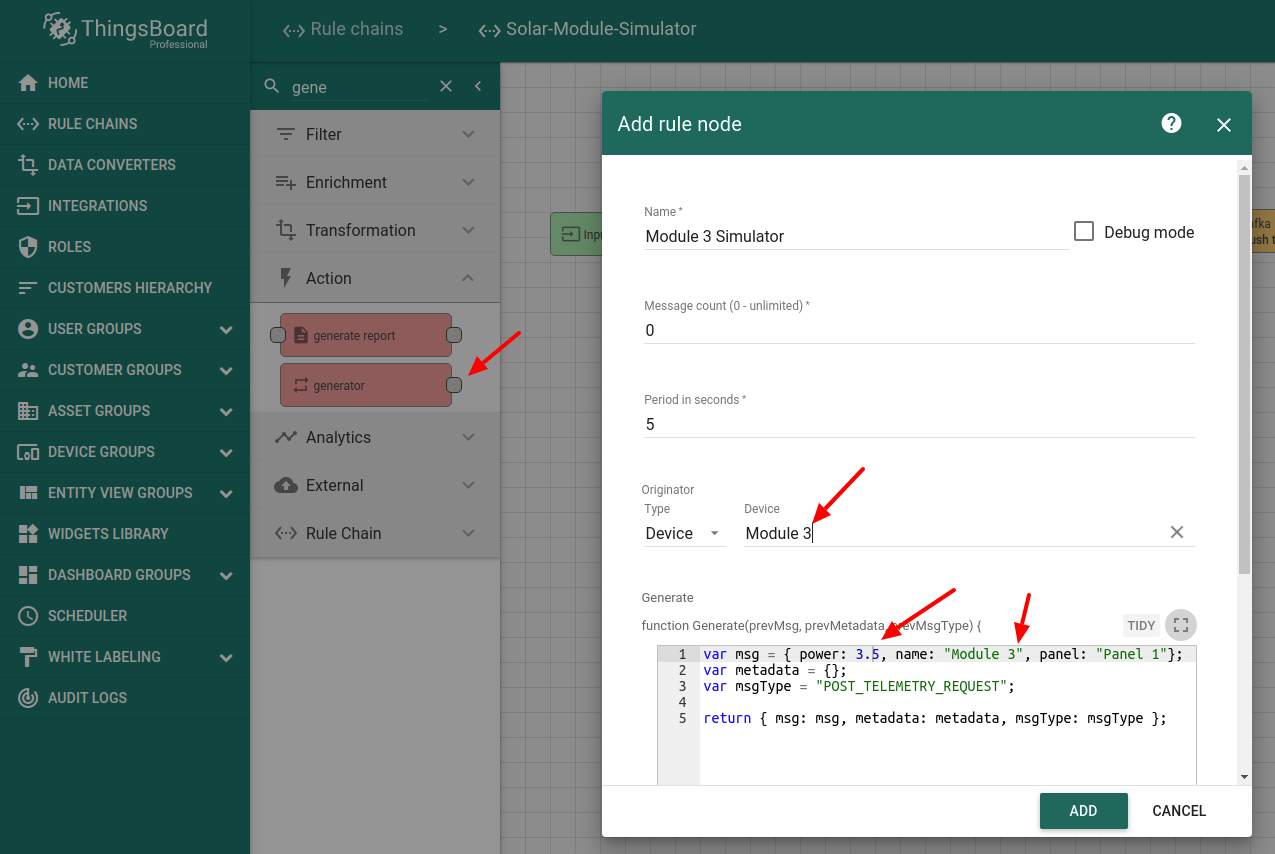 The result rule chain should look similar to this one:

You can also download the rule chain JSON file and import it to your project.

Once the rule chain is imported, you should check the debug output of the Kafka node. If your Kafka is up and running at localhost, you should see similar debug messages. Notice the absence of errors in debug log:

During this step we will download and launch sample application that analyze raw data from “solar-module-raw” and produce valuable insights about module degradations. The sample application calculates total amount of energy produced by each module in the panel within the time window (configurable). Then application calculates average power produced by module for each panel and it’s deviation within the same time window. Once this is done, the app compares each module values with the average and if the difference is bigger then the deviation, we treat this as anomaly.

The results of anomaly calculations are pushed to the “anomalies-topic”. ThingsBoard subscribed to this topic using Kafka Integration, generate alarms and store anomalies to the database.

Feel free to grab the code from the ThingsBoard repository and build the project with maven:

Go ahead and add that maven project to your favorite IDE.

Main dependencies that are used in the project:

The Kafka Streams Application logic is concentrated mainly in the SolarConsumer class.

Let’s configure ThingsBoard to subscribe to the “solar-module-anomalies” topic and create alarms. We will use Kafka Integration that is available since ThingsBoard v2.4.2.

Example of the incoming message that is produced by our Kafka Streams application:

See the following script that is pasted to the Decoder function section: 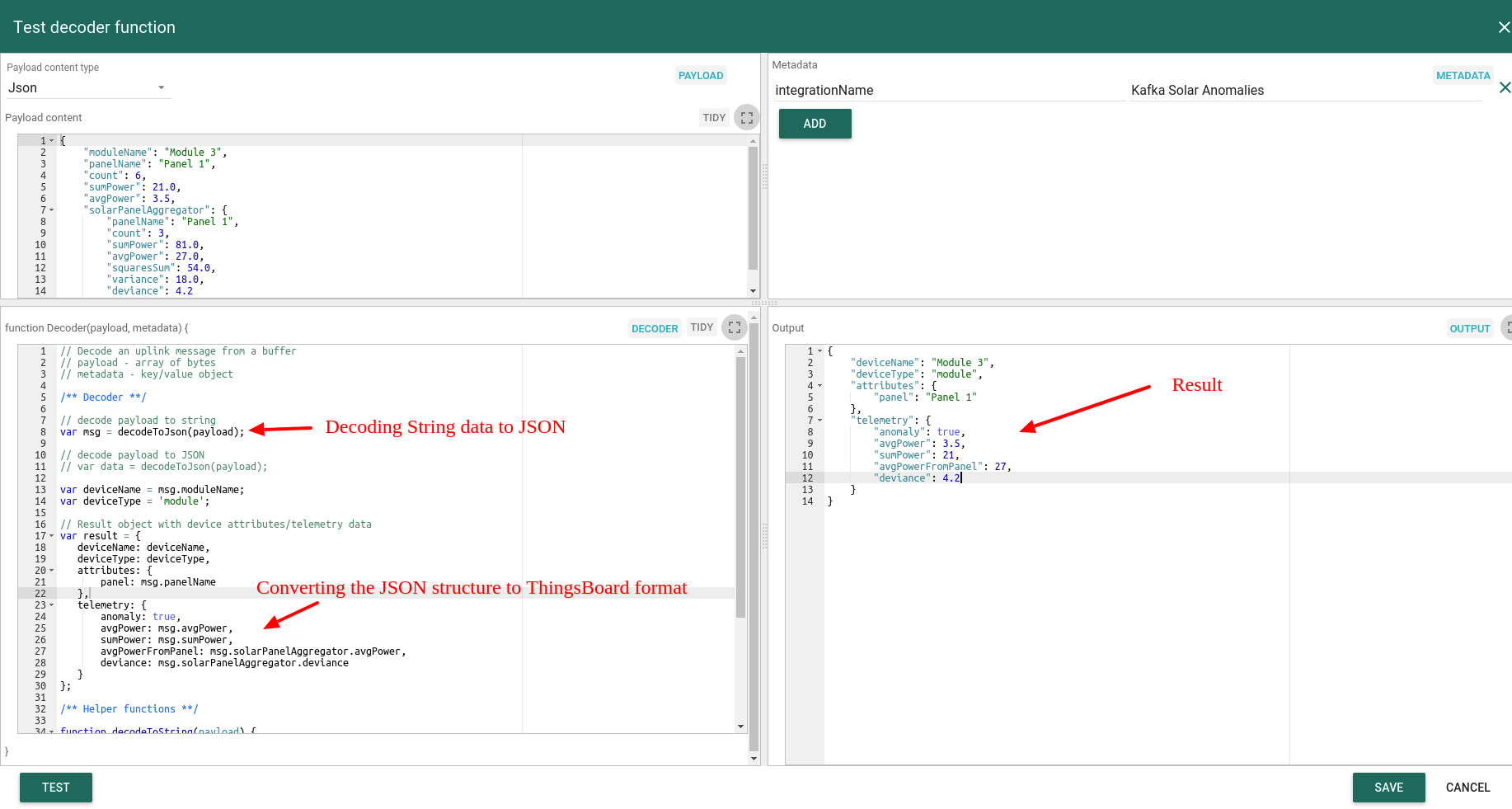 Let’s create kafka integration that will subscribe to “solar-module-anomalies” topic. 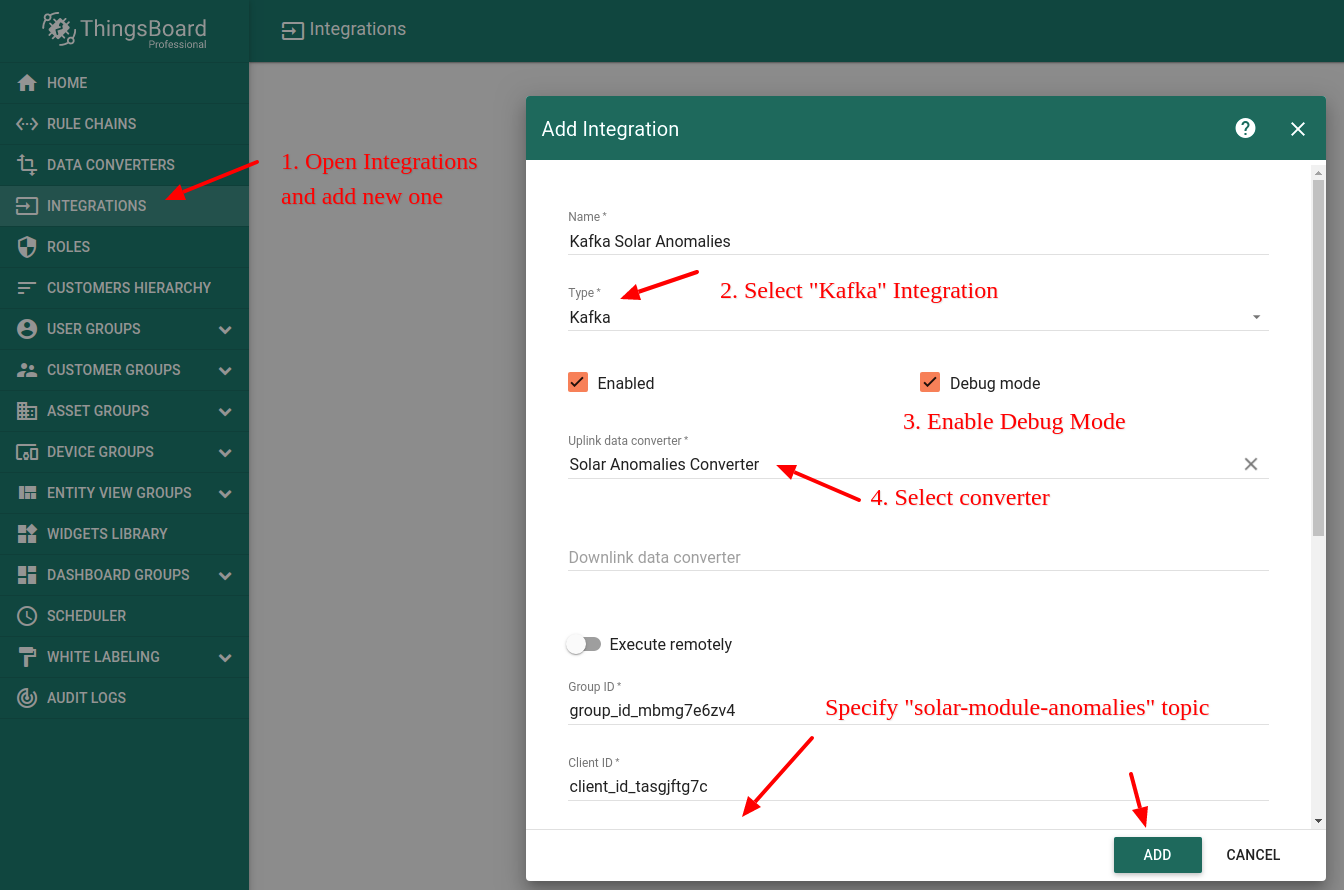 Follow existing “Create and Clear Alarms” guide to raise the alarm based on the “anomaly” boolean flag in the incoming telemetry and use “Send email on alarm” guide to send email notifications. Explore other guides to learn mode.

Although the Debug mode is very useful for development and troubleshooting, leaving it enabled in production mode may tremendously increase the disk space, used by the database, because all the debugging data is stored there. It is highly recommended to turn the Debug mode off when done debugging.